Vasileostrovsky district includes two large Islands separated by a small river Smolenka: Vasilevsky island and Decabrists, as well as a small Sulfur island. The total area of the district is 2146.88 hectares. Its borders are the rivers Bolshaya Neva from the North and Malaya Neva from the South. Vasilievsky island is the largest in the Neva Delta. Its Western side, facing the Gulf of Finland, is the Central link of the" sea facade " of St. Petersburg, and the Eastern end Strelka is included in the panorama of the citywide center. 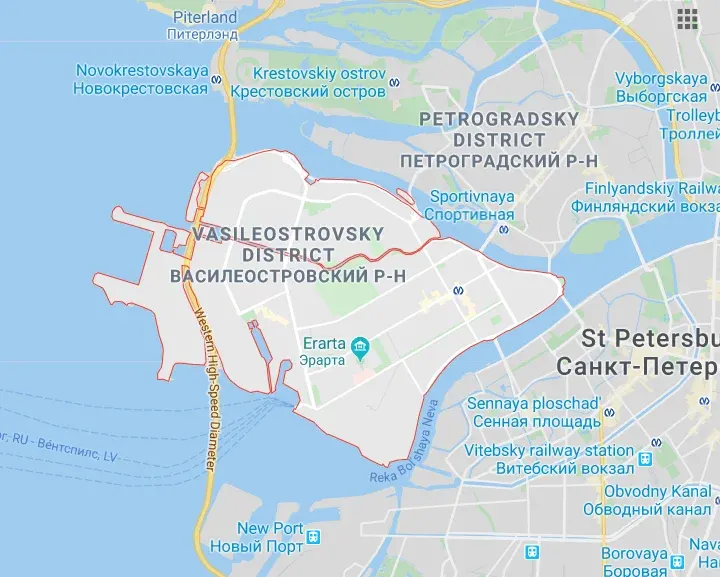 The territory of the district includes two large Islands separated by a small river Smolenka: Vasilevsky and Decembrists (Goloday), as well as a small Sulfur island. The total area of the district is 1.4 thousand hectares, which makes it one of the smallest in St. Petersburg. Of these, the area of green space is 118 hectares, 51 hectares of which are cemeteries. Rumyantsev, Opocensky skipper and gardens, two small Park and Yes, small courtyard gardens.

The total length of the streets of the district is 90 km. the area of the road surface is 198 hectares.
The development of Vasilievsky island began several centuries before the emergence of the Northern capital. According to the "Census salary book on Novgorod votskaya Pyatina" 1500, on the "Vasiliev island" lived fishermen, there were arable land. The first fixation of the island's name dates back to that time. There are scientific hypotheses that explain the name on behalf of several Novgorod posadnikov: Vasily Drake Vasily Kazimir, Vasily Ananyin.

There is a version about the origin of the name from the name of one of the first settlers of the island — a fisherman Vasily. Settlements existed along the Malaya Neva, near the mouth of the Smolenka river and on the right Bank of the Smolenka river. In the SEVENTEENTH century, when Swedish rule, the island had also the name of Gammelholm — Pond island. Probably, the ponds formed on the tributaries of the Smolenka river were meant. The island belonged to at that time the Swedish commander de La Gardie J., the manor which was located on the spit. There was also a Finnish name for the island: Hirvisaari-elk island. In the transformed form it appears in documents as the name of the village of Girvisaria, where pilots lived until 1712.

Soon after the founding of St. Petersburg, the island was again called Vasilevsky. According to the historian A. Bogdanov, Peter I sent orders to Vasily Korchmin's artillery battery standing on the Arrow, with a laconic inscription "to Vasily on the island". So Vasily Korchmin his name contributed to the revival of the old place name. From 1704 to 1714, the island was owned by the Governor-General of St. Petersburg, Prince A. D. Menshikov, hence the name Princely or Menshikov. And later, from 1727 to 1730, there was an official name-Preobrazhensky island. According to the administrative division of St. Petersburg since 1737, the territories of Vasilievsky and the neighboring island of Golodaya were part of the Vasilyevsky police unit.

There are several versions about the origin of the name of the island. One of them takes him to the Swedish word "halaw," which means willow. A number of works indicate that the name "starve" arose in connection with the inaccurate pronunciation of the name of the English doctor Thomas Golliday, who owned a plot of land on the island in the XVIII century. In the other the name of the doctor indicates otherwise — Matthews of Halliday. The sound change (starve instead of Golliday) was the result of folk etymology-rethinking a little-known word and replacing it with a more understandable one. The current name was given in the 1920s, as it was assumed that the bodies of the executed leaders of the Decembrist uprising were buried here.

The uniqueness of Vasileostrovsky district lies in its island status — it is completely located on one island (in fact, it is hardly possible to consider the island of the Decembrists and small Islands separated by small rivers as something separate) and with other areas of the city has only water boundaries.