City tour of St Petersburg, 3-5 hours at a fixed price 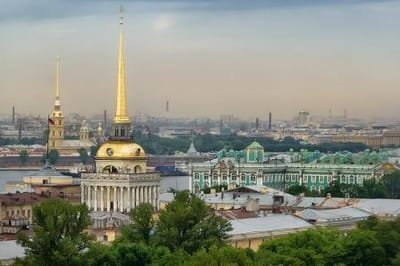 Starts from 3-hours for just 60€ + 5€ *surcharge for the Peter & Paul's parking fee if visited. SUV vehicle or similar.

Do you want to see more and take photos near the most beautiful places in Russia's Northern Capital? Book the City Sightseeing Driving Tour. Your English-speaking driver will show you around St. Petersburg's city center and stop where you want to. It can be conjoined with shopping. Pick-up and drop-off spot on demand. Tailor-made options and special requests are very welcome! Available at any time of the day and might take 3 - 5 hours.

Saint Petersburg is so called Northern Capital of Russia as well as the official Cultural Capital of the country.

Saint Petersburg was founded by the order of Peter I on May 16, 1703 (according to the old calendar - May 27).
Originally, the city was named St. Peter-Burch in honor of the Apostle Peter and consonant with the Dutch city of Sint-Petersburg. The Dutch roots of the city's name are not surprising since Peter I studied and lived in the Netherlands for some time. However, already in 1720, the city changed its name to the familiar one-Saint Petersburg, from which the abbreviations Saint Petersburg and the more modern Peter are formed. Hare island is often in those days, the first building of the city was a fortress.

Saint Petersburg was no exception – the Foundation stone was laid on May 16 (27), 1703 on Zayachy Island, located just a few kilometers from the Gulf of Finland. The plan of the fortress was drawn by Peter I personally. Initially, the walls of the fortress were bulk. Fortifications made of stone began to be made only in 1706. The city was built on the site of swamps, which were drained by free laborers. The construction of urban structures was supervised by invited foreign engineers, and the construction work was carried out by masons from all over the country. To speed up the construction of the city, Peter I banned construction of stone throughout the country, which caused an influx of specialists to the new city.

The first inhabitants of the new city, as it is easy to guess, were soldiers and sailors who served in this territory, as well as farmers and artisans forcibly brought from other regions. Already in 1712, a very young city became the capital of the Russian Empire, sheltering the Royal court within its walls. It is worth noting that St. Petersburg remained the capital for more than two centuries until the revolution of 1918. This time was enough for the city to be recognized as the unofficial Northern capital of the country. On January 1725, Peter I died, but the history of St. Petersburg continues. In 1727, the first bridge across the Neva River was built, connecting the Admiralty part of the city with Vasilievsky island. However, it lasted only one summer. The first permanent bridge over the Neva river was built only in 1850 and received the little-known name Nevsky. Then it changed its name 3 more times-Blagoveshchenskiy, Nikolaevsky, and finally got the name by which we are currently known - Lieutenant Schmidt bridge.

The history of the first Winter Palace of St. Petersburg begins in 1711 when a small "wooden house in the Dutch style" was built on the instructions of Peter the Great. But in 1712 it was rebuilt and turned into a real Palace. Soon the second Winter Palace was built according to the project of I. Matarnovi. Just a few years later, the architect D. Trezzini built the third Winter Palace, using the second Palace as the Western part of the new structure. Then came the fourth and fifth. The most famous was the sixth Winter Palace, completed by the great architect Rastrelli in 1762. From that time to the present day, it remains the hallmark of the city. The Hermitage was built in 1764 (translated from French. - a place of solitude or a hermit's hut).

For more than 250 years of its existence, it has become the largest museum in Russia and one of the most famous in the world. It attracts millions of tourists from all over the world every year. The city continued to grow and develop. By the beginning of the 19th century, the city's population reached 200 thousand people, which was only slightly inferior to the population of Moscow in the same period. On December 14, 1825, the Decembrist uprising took place on the Senate square of the city, which served as the first significant push of the country to abolish serfdom, which happened, however, only in 1861.

1917 was the year of the beginning of the revolution. The February revolution overthrew the tsarist regime, which was replaced by the Provisional government and the Petrograd Soviet. This was followed by the Great October Revolution and the Civil war. In 1918, Moscow became the capital of Russia again, and politics left the city. In 1924, Saint Petersburg was renamed Leningrad. Leningrad in the besieged second World war left its heavy imprint on the history of the city. The siege of Leningrad lasted 872 days - from September 8, 1941, to January 27, 1944. Until now, there is no exact data on the number of victims – different sources say that the victims range from 300 thousand to 1.5 million. According to official data, this figure is about 700 thousand. The city was drained of blood, but it survived. On May 1, 1945, it was awarded the title of hero city. On September 6, 1991, Leningrad became Saint Petersburg again.

Modern Saint Petersburg is a Federal city (on a par with Moscow) with a developed infrastructure. Millions of Russians and foreigners are flocking to the number one tourist destination of the country.

In fact, it is impossible to describe the history of Saint Petersburg in one article. A huge number of famous people of Russia and the world lived and worked here, and many of the most beautiful masterpieces of art were created. This is a great city with a long, sometimes violent, but always interesting and fascinating history.