Moskovsky district is located in the South-West of St. Petersburg and covers an area of 7305.48 hectares. the District is rightly called the southern gate of the city, because its territory is the international airport "Pulkovo", as well as two major highways of the North-West of Russia — Moscow and Kiev highway. The current shape began to take shape after the great Patriotic war. Today it is an area of wide avenues and squares, magnificent architectural ensembles, beautiful green parks, squares and courtyards. 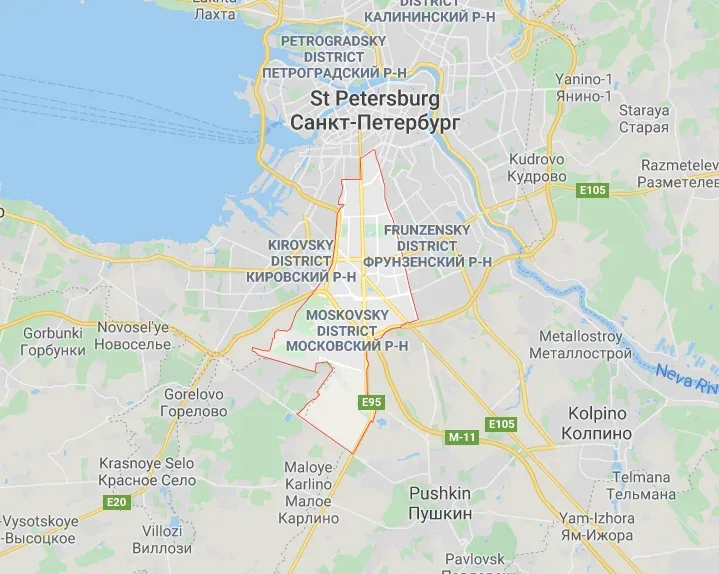 The Central highway — Moskovsky prospect, which gave the name to the district, originated in the early years of St. Petersburg and was formed over two centuries. This is evidenced by the preserved architectural monuments and ensembles: Chesmen Church (now it bears the name of John the Baptist), Chesmen Palace, Novodevichy monastery, necropolis, Moscow triumphal gate, erected in 1833-1838 in honor of the victory of Russian arms over the Turks and Persians, ancient milestones.

It is necessary to mention also one more architectural monument in the territory of the area. On the Pulkovo heights is the Pulkovo Observatory, built in 1839 by architect A. p. Bryullov, which today is one of the leading domestic and world astronomical centers.

During the great Patriotic war (1941-1945gg.) the area became the forefront of the defense of Leningrad, all 900 days of the blockade on the territory of the district was the front line. Much in the area reminds of the past. This Victory Park, founded by residents of the victorious city on October 7, 1945, and the Pulkovo line, and the monument on Victory square. 1418 days the Soviet people in a soldier's greatcoat and working overalls with heavy and persistent fights went to a Victory. Among them are many residents of the Moskovsky district. On Victory square-7.5 km from Pulkovo heights-erected a monument to the heroic defenders of Leningrad. In the memorial hall of the memorial the names of cities and settlements where the most fierce battles for Leningrad took place are immortalized.

Most of the buildings on the main highway, and in General in the area belong to the Soviet era. The neighborhood of bright examples of different architectural styles: classicism, constructivism, creative pursuits of the 20s, "Stalin's Empire" create a unique appearance of the Avenue.

In 2006-2008, a comprehensive repair was carried out on Moskovsky Prospekt: modern road surface was laid, the latest lighting equipment and technical means of traffic regulation were installed. At the same time, a fountain complex opened on Moscow square. The square has become a favorite place of rest of St. Petersburg residents and guests.

Today in the Moscow region — more than 343 thousand inhabitants (6% of the population of St. Petersburg), of which about 260 thousand live in separate apartments. In the area — svyshe1270 houses, and 300,000 apartments, 34 schools, including two gymnasiums, Lyceum, 8 schools with advanced study subjects. There are 16 secondary special and professional educational institutions, 71 pre-school institutions.

Industrial development of the current territory of the district began in the mid-19th century along the Moscow highway and was spontaneous. Residential development and social infrastructure of the district were created mainly in the 50-60s of the XX century and had a systematic and complex character. This determined, firstly, the layout and external architectural appearance of the district, where the main highway - Moskovsky Prospekt is dominated by the so - called Stalin Empire, and as the distance towards the Vitebsk and Baltic railway lines are concentrated so-called "Khrushchev" - the houses of the first mass series.

Secondly, the saturation of the infrastructure of the district, which was initially formed taking into account the existing standards of provision of the population with transport, education, health, culture, trade and consumer services, etc.over the past decade, 169 residential houses have been built in the district, which give the district a modern look and represent various modern architectural solutions. Despite the fact that the district is an area of existing development, it has not lost its appeal to investors.

Moskovsky district belongs to the industrially developed areas of the city and is one of the five largest, providing about 40 % of industrial production. The average annual number of employees in the economy is 120.0 thousand people. large and medium-sized industrial enterprises and scientific organizations, consumer market facilities are located in the district.

Traditionally considered prestigious residential real estate in the Moscow region. But if until recently the idea of prestigious housing was associated primarily and mainly with the so-called Stalin's houses, today the appearance of the district is changing. A qualitatively new living environment is being formed here. New residential areas meet all modern requirements: communications, Parking, sports facilities, etc. at the Same time, office, retail and warehouse real estate is becoming more attractive. Moskovsky district can be called the St. Petersburg "Golden mile".

Moskovsky district is one of the most comfortable districts of St. Petersburg. This applies to both Central neighborhoods and remote neighborhoods. Today, the Moscow district — a metropolis in miniature-invites all friends and guests from around the world for investment and business ventures, for participation and mutually beneficial cooperation in various areas of business, scientific and cultural life. We hope that this will promote mutual understanding, strengthen friendship and develop warm, sincere relations between the countries.