The Central district was formed in the spring of 1994 from the former three: Smolninsky, Dzerzhinsky and Kuibyshev, but it has a tradition and history вating back to the founding of St. Petersburg. The territory is 17,12 sq. km (1,2% of the citywide area), the population is about 220 thousand people. In terms of population density, the Central district ranks first in the city. 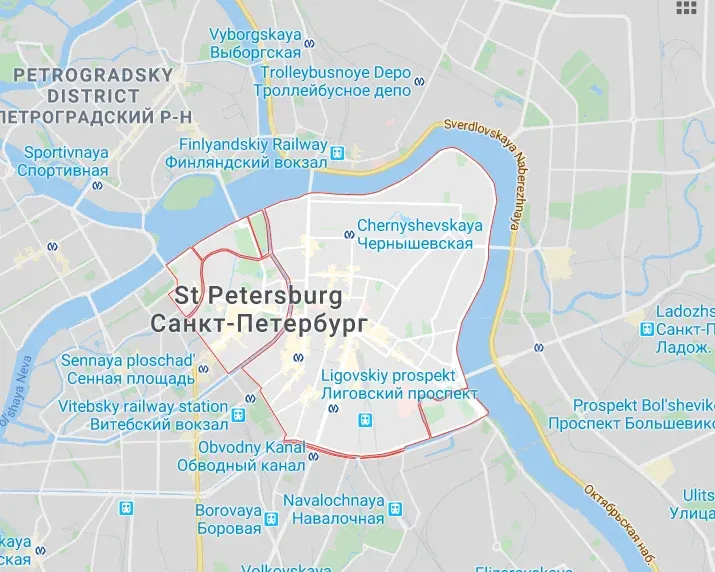 The district includes the historical Admiralty, Kazan, Foundry, Christmas and Alexander Nevsky parts ("parts" in St. Petersburg VIII-XIX centuries called areas of the city). "Capital Paradise" was born by the genius and work of several generations of great architects.

In the Admiralty part the main and most beautiful palaces of the capital of the Russian Empire are concentrated. The center of St. Petersburg under Peter I was a secluded Foundry Palace at the source of the Fontanka in the Summer garden. Up the Neva from him was built Foundry house, behind him, to the Smolny, were the palaces of the heir and the Princess. Closer to Tsaritsyn meadow (field of Mars) were placed German and Greek settlement. At the same time (in 1720) at the opposite end of the Bolshaya Perspektiva (as Nevsky prospect was then called) Peter I laid the Alexander Nevsky monastery.

Under Empress Elizabeth Petrovna, St. Petersburg acquires splendor thanks to the genius of Baroque architecture B. F. Rastrelli. Most of his creations adorn the Central district. This Winter, Anikovsky, Vorontsov, Stroganov Palace, the Smolny convent. Under Catherine the great in creating unique and unique appearance of the center of St. Petersburg involved a whole generation of great architects: A. Rinaldi creates Marble Palace and Church of St. Catherine, Y. Felten — the small Hermitage, the Neva fencing of the Summer garden, I. Stasov — Tauride Palace, Trinity Cathedral, A. Voronikhin — Kazan Cathedral, J. Kvarengi — Hermitage theatre, bell tower of the Church of the Vladimir mother of God.

These and many other architectural gems adorned the ceremonial crown of the capital in the brilliant second half of the XVIII century. The genius of K. I. Rossi created in the center of the city a single whole of majestic ensembles and squares, state buildings, embankments, palaces. This was an achievement of world urban planning, and St. Petersburg has become one of the most beautiful cities in the world.

Currently, there are 357 historical and architectural monuments in the district, 20 monuments of monumental sculpture decorate its squares. Not in Russia and in the world there are not many places with such a concentration of historical and architectural masterpieces. The same can be said about cultural institutions. On our territory there are 18 concert organizations, 37 theaters, among them: the Bolshoi drama theater. G. Tovstonogova, Opera and ballet theatre. M. p. Mussorgsky, Maly drama theatre, theatre of choreographic miniatures, Philharmonic, a Cappella, Jazz Philharmonic, "Petersburg Concert" and many others.

28 museums give reason to consider the Central district the most "Museum". Here are the world-famous State Hermitage and Russian Museum, the Russian Museum of Ethnography and the all-Russian Museum. A. S. Pushkin, literary, theatrical, musical museums. Their halls and storerooms carefully preserve the unique cultural and historical heritage of the state.

There are many great names whose lives and works are connected with the Central district. These are streets, palaces, theaters, libraries-an inexhaustible and priceless Treasury of our culture, which is entrusted to us to protect.

The Central district of St. Petersburg is a historically developed city center, most of which is included in the city protection zone as a monument of architecture and history, where new construction and development of industrial enterprises is limited or prohibited. From the North, East and South its borders run along the Neva river and the Obvodny canal, from the West the Central district borders with the Admiralty along Gorokhovaya street, Zagorodny Avenue , Zvenigorodskaya street with access to the Obvodny canal.

The territory is 17,12 sq. km (1,2% of the citywide area), the population is about 220 thousand people. In terms of population density, the Central district ranks first in the city.