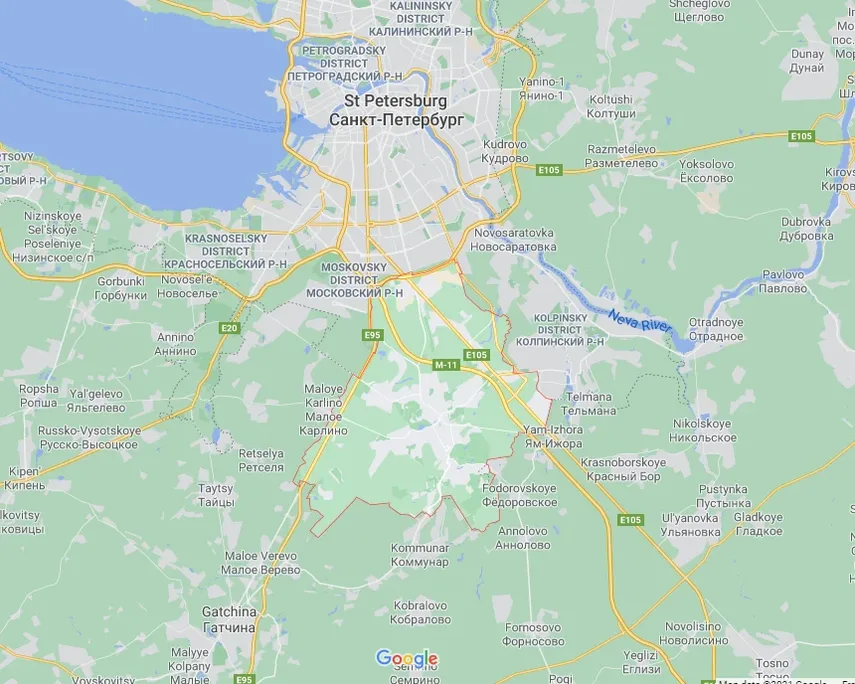 Within the boundaries of the district there are 5 municipalities, which include 2 cities, 3 villages, 14 historical zones and 12 territorial zones.The total territory of Pushkinsky district is 24032.6 ha (16.7% of the area of Saint Petersburg‑St. Petersburg).

Pushkinsky district was formed on June 5, 1938 as a result of the reorganization of the city council in the city of Pushkin into a district council with direct subordination to the Lengorsovet.

On July 25, 1953, after the abolition of the Pavlovsky district of the Leningrad Region, Kuzminsky, Moskovsko-Slavyansky, and Tyarlevsky selsoviets were transferred to the Pushkin District Council.

On June 21, 1958, the working settlement of Shushary was formed with the subordination to the Pushkin District Council, and the Moskovsko-Slavyansky Village Council was liquidated.

On March 26, 1959, the city of Pavlovsk was transferred to the Pushkin District Council.

On April 2, 1959, the workers ' settlements of Alexandrovskaya and Tyarl'evo were formed with subordination to the Pushkin District Councill.

In 1995, the independent Pavlovsky District of St. Petersburg was established on the territory of the city of Pavlovsk.

In 2005, the territory of the Pavlovsky district was again included in the Pushkin district.

The main attractions of the district are the state museums-reserves "Tsarskoye Selo" and "Pavlovsk". The southern line of the Malaya Oktyabrskaya Railway stretches across the territory of the district.