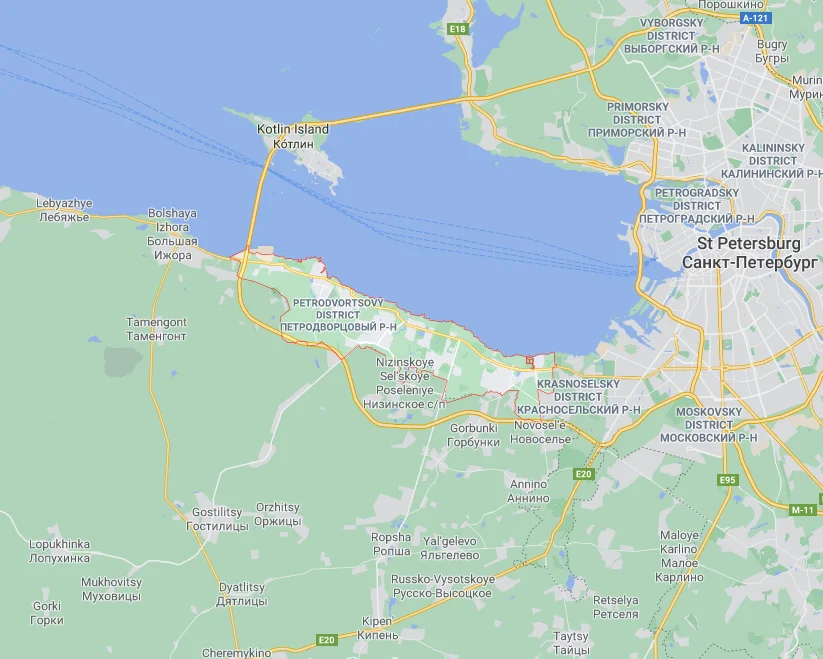 On the territory of the municipality "City of Peterhof" there is a railway station "New Peterhof" and three railway stops, which are part of the infrastructure of the Baltic Line of the Oktyabrskaya Railway and are equipped with two suburban platforms. The names of these points in the order of their distance from the Baltic Railway Station: "Red Dawns", "Old Peterhof", "University". On the territory of the municipality, there is also a pier (pier on the Gulf of Finland).

Peterhof was founded in 1710 as an imperial country residence, the status of the city-since 1762. The city is a monument of world architecture and palace and park art of the XVIII-XIX centuries, the Peterhof Museum-Reserve. Scientific district since 2005.

In 1918, the former imperial palaces of Peterhof were turned into museums. On May 18, 1918, the first excursion of the workers took place in the halls of the Grand Palace. During the first summer of the museum's operation, it was visited by more than two thousand workers. Soon, recreation centers, sanatoriums, and children's institutions began to open in the numerous buildings where courtiers and palace servants used to live; playgrounds, reading rooms, and bandstands appeared in the parks.

In 1936, Peterhof was reassigned to the Leningrad City Council.

From September 23, 1941 to January 19, 1944, the city was occupied by German troops. On October 5, 1941, the Peterhof landing party (marine) was landed in Peterhof. The front line was located on the western border of the city along the line of defense of the Oranienbaum bridgehead. As a result of the military actions, the city was almost completely destroyed or burned. The ensemble of the Lower Park was the most severely affected. About 30 thousand objects of painting, decorative and applied art and sculpture from the palace collections were destroyed or looted; fountains and the water supply system were disabled; 10 thousand trees — more than one third of the green area-have been cut down.

Since 1990, the palaces and parks of Petrodvorets have been part of the artistic and architectural Palace and Park Museum-reserve "Peterhof" and in the same year were included in the UNESCO World Heritage site under the name "The Historical Center of St. Petersburg and related monument complexes". In 1997, the Peterhof Museum was included in the State Code of Especially Valuable Objects of Cultural Heritage of the Peoples of Russia.