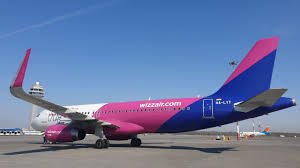 Wizz Air is the largest budget airline in Central and Eastern Europe, offering discounted fares and flights from / to Saint Petersburg airport, as well as cheap flights to Budapest.

St. Petersburg Pulkovo LED Terminal 1 Airport is located 23 kilometers from the Palace square, located in the city center. The most convenient way to get to the Central District is by taxi. The ride takes about 40 - 55 minutes. Comfortable cars with English-speaking drivers are always available for bookings.

The Ministry of Transport of the Russian Federation informs that starting from January 1, 2020, the Pulkovo airport will introduce a regime for removing restrictions on the seventh degree of freedom of air for flights of foreign airlines to St. Petersburg for a period of five years. As a result of preliminary negotiations, European airlines such as Wizz Air, Ryanair, EasyJet, Volotea, Air Baltic, Fly One and others expressed interest in performing flights on the seventh degree of freedom of air space in 2020 from 22 countries, with a subsequent increase in the list of States. In total, the list includes 30 countries. Countries of the first group will be able to fly to Pulkovo on the seventh "freedom of air" without restrictions. This group includes 21 countries: Belgium, Denmark, Estonia, Finland, Ireland, Iceland, Latvia, Lithuania, Luxembourg, Macedonia, Malta, the Netherlands, Norway, Poland, Portugal, Romania, Serbia, Slovakia, Slovenia, Sweden, Switzerland.