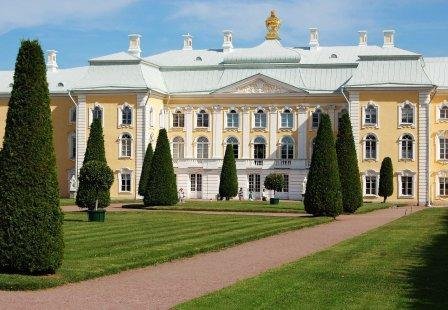 How to find Peterhof and buy tickets.

Going or looking for the Peterhof? Some locals can send you to Petrodvorets. Don't worry, that's the same place. The most popular mode to get there is by taxi with us and go back by the hydrofoil boat.

First of all: do yourself a huge fovour and forget about a metro, bus, train, and the most of all: the "MARSHRUTKA" - the way, that many tour guides or "concerned" local citizens are suggesting to get there! Pushkin and Peterhof are the two famous tourist destinations outside the St. Petersburg and you have to use taxi or transfer service to get there or to get back.

Click here in order to book your taxi transfer to Peterhof

Click here for the rules of ordering, paying and receiving the tickets to Peterhof

Click here in order to buy the entrance tickets for Petergof

The Grand and refined Grand Peterhof Palace, whose facade stretches along the terrace for almost 300 meters, occupies a dominant position in the composition of the Peterhof ensemble, linking the Upper garden and the Lower Park into a single artistic whole. "Spreading its wings" over the water extravaganza of the Grand cascade, it unites and forms around itself a harmonious system of alleys, architectural structures and fountains.

The existing appearance of the Palace was formed for almost a century and a half. In the Petrine era, it was a small two-story building, the width of which did not exceed the width of the Grand cascade, it was called the Upper or Upland chambers and served for receptions and holidays. The idea of the location and the original appearance of the Palace belonged to Peter himself, and the architect embodied it.F. Braunstein and such outstanding architects as J.-Yes. Leblon and N. Michetti. In 1732, two galleries were added to the Palace according to the project of M. Zemtsova, however, the modest Peter's Palace no longer met the splendor and luxury of the Russian court of that time.

This was the reason for its restructuring, carried out by F. B. Rastrelli. The favorite architect of the Empress Elizabeth Petrovna had to perform a difficult task – not just to create a pearl of the Elizabethan Baroque, but also to preserve the walls of the Petrovsky Palace, embedding them in a new environment. Rastrelli handled the task brilliantly. Another floor was added to the Palace, and the Central space was significantly enlarged, which was joined by the wings of one-story galleries, completed with side buildings-the Church And the building under the coat of arms. The interiors of the Palace, created by the architect, struck with dynamics and fabulous luxury. The walls of the halls were decorated with gilded carvings, mirrors gave the impression of endless perspectives and visually enlarged the interior space. Peter I's Oak study, preserved by Rastrelli, became a relic placed in the magnificent frame of the new Palace.

In the 60–70s of the XVIII century, Baroque splendor goes out of fashion, and the interiors of the Palace begin to take a different shape, in accordance with the new style – classic. At this time, the main element of decoration was stucco compositions that gave the impression of nobility, simplicity and refinement of artistic taste. By order of the Empress Catherine II and architect Yu. m. Felten re-decorates the dining Room, Throne and Chesmensky halls, and Zh. - Yes. Wallen-17 1766 – 67 there are two Chinese offices.

The Palace is Changed in the NINETEENTH century. 1846., by order of Emperor Nicholas I, in the East wing facing the Upper garden, the architect A. I. Stackenschneider, having built the third floor, creates eight interiors on the occasion of the marriage of the Emperor's daughter Olga Nikolaevna with Prince Karl of Württemberg. Since then, the Eastern wing has been called the Olginsky half of the Grand Peterhof Palace.

The architectural appearance of the Grand Palace, which was formed as a result of all the alterations, bears distinct traces of different artistic styles and tastes, but the talent and professional respect for each other allowed architects of different eras to create a complete work.

Click here to book your safe and reliable taxi in St. Petersburg