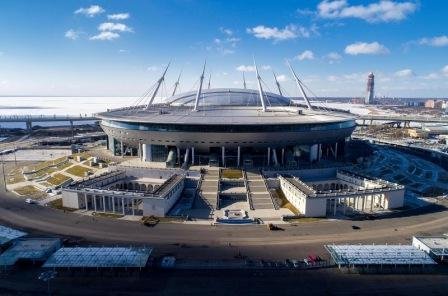 Gazpom Arena is the Home Stadium of Zenit St. Petersburg.

Gazprom arena is the most visited football arena in the country: in the 2017/18 season, more than 1 million fans visited Zenit's home matches, which was a unique achievement for all Russian football.

The first football match held at the arena was a game between Zenit and Ural. On April 22, 2017, the blue-white-blue team won 2:0 over the team from Yekaterinburg. The author of the first goal in the history of the arena was Serbian defender Branislav Ivanovic.

The arena was built on the site of the historic stadium. S. M. Kirov. For construction in 2006, the project of Japanese architect Kise Kurokawa was chosen, which provided for the preservation of the dimensions of the hill and the pavilions of the old arena. The location of the football field, as well as the historical ticket pavilions and the monument to S. M. Kirov, has also been preserved.

The main design solutions were to cover the bowl of the stands with a sliding roof with a diameter of 286 meters, supported by 8 masts, and a retractable field that allows non-football events to be held on a concrete base.

In the summer of 2017, the St. Petersburg stadium hosted four matches of the confederations Cup and became the most populated arena of the entire tournament, and in 2018 it hosted seven world Cup matches.

A total of 448,686 fans attended the arena during the four group stage games, the 1/8 final meeting, the semi-final and the third-place match, with an average attendance of 64,098 spectators.

For the duration of the 2017 Confederations Cup and 2018 FIFA world Cup matches, the stadium was named "Saint Petersburg".